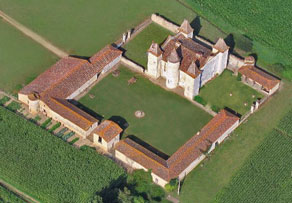 The Château de Caumale, dating from the 16th and 17th centuries, is situated in Escalans in the French department of the Landes. It was designated as a historical monument on January 31st 2002.

The medieval Château de Caumale is surrounded by outer walls which were transformed and opened into wine storehouses. It consists of two low towers from the 12th century, and five other towers from the 15th-16th centuries.

Gabardan, fief of Gaston Phebus, of the d’Albret famille, is a hunting territory. Caumale, a defense chateau during the 100 Years’ War and Wars of Religion, has always been a place of refuge for Gabarret, its city and its monastery—Abbot Devert writes of the entrance in Gabarret of an underground passage leading to Caumale. Always inhabited by great explorers, we can trace its colonial history all the way from Saint-Domingue to Cuba with Delisle, and finally to the time when it could be said, "Sire, your entire court is Creole…"

The chateau was internally reorganized in the 18th century by these same Delisles. If we attended an 1830 wedding, we would find guests that included Rochambeau the younger, Vilmorin, Humbolt…

Its silhouette evokes the Gascon chateaus in the Middle Ages. The square-bodied abode includes four corner towers: the postern tower, the grain tower, the oratory, the lookout, and, in addition, the great staircase tower that leads to Governor Rochambeau’s bedroom. 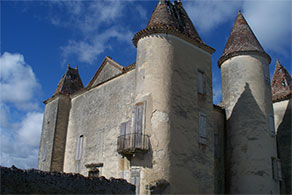